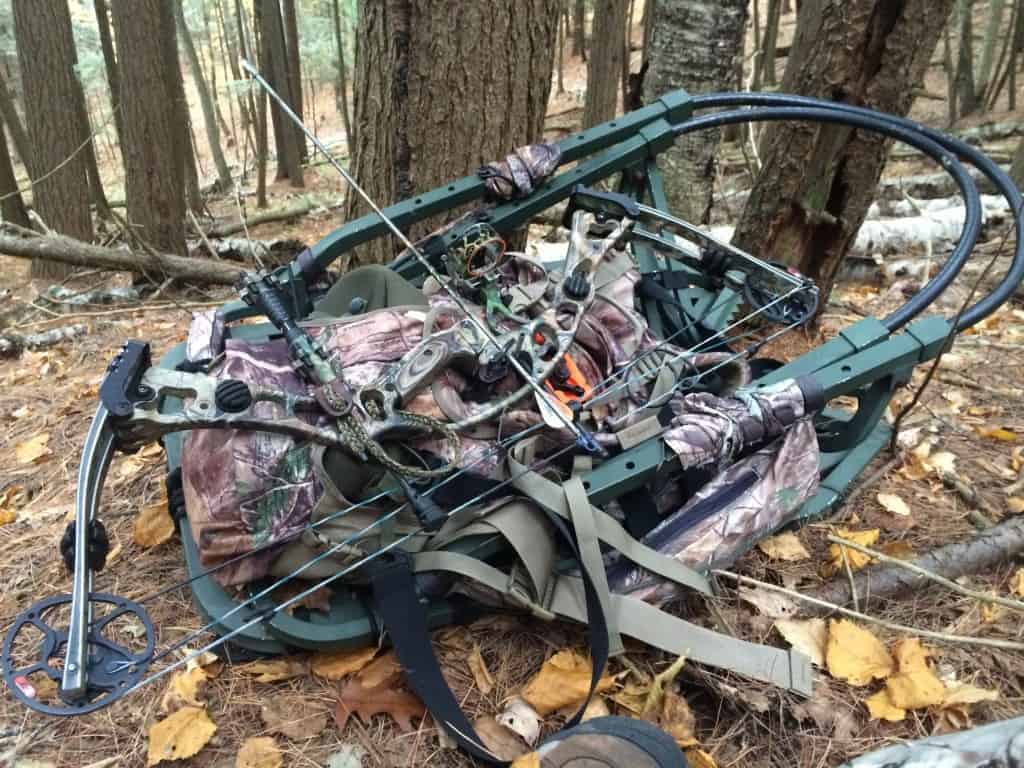 Friday night found me sitting in a ladder stand overlooking Christian’s food plot. In what would be my last archery hunt in Vermont for the year, I was hoping to encounter some venison on the hoof. I had actually planned to hunt NH all weekend, but a call from Christian changed my mind. He told me there had been a lot of recent activity in the food plot, even some right before dark. As it turned out, I was the only activity in the food plot on Friday night.

On to NH for an archery and youth hunt combo. This time, Christian and his son, Noah, came with me to participate in the New Hampshire Youth Weekend deer hunt. Noah was pumped. He brought three knives with him, one of which would be good for in a survival situation had they gotten lost. One of the others he hoped to use to gut out a deer. Now that I think about it, he never did explain the reason for the third. Maybe it was dull and just for good luck? I do that too. 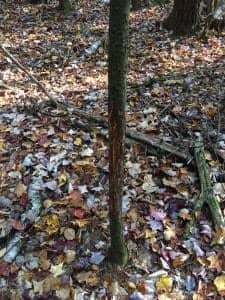 Unfortunately for Christian and Noah, they relied on my guiding skills for their success and saw no deer on the morning hunt. I still hunted all morning and did not see any deer either, but I did find a fresh rub near a swamp. That is the first rub I have seen all year. This year is weird that way – very little rutting activity so far.

For the evening hunt, I decided to set them up where I had wounded the doe a week ago. The oak trees there have the most deer sign as anywhere else on the hill, so I was hoping they’d see something. On the walk in we jumped a deer which bounded down the hill to where the oaks were. As we crested the hill we kept catching glimpses of it at the edge of our visible range. Noah got set up, but the deer didn’t cooperate and moved out of sight.

Later that afternoon a few deer showed up but winded them before they could get a shot. Christian claims there were two, Noah says three. I like this kid and he is well on his way to being a good storyteller. If you have not seen his video update at the end of the hunt I encourage you to watch this video on Facebook – Click on this Link!

I didn’t see anything but got some great exercise. I carried my climber all afternoon but couldn’t find a decent tree in which to set up, so I used it a bow holder and thought about how excited I was to carry it all the way back to the truck at the end of the evening hunt.

Sunday night was futile as well. With five of us out hunting I think it’s safe to say the deer were not moving. Nobody saw a thing. Actually, I did see another porcupine. He wandered through the woods to within ten yards of my tree. I pulled out my Primos Buck Roar and gave it to him hard. He crawled a foot up a tree, put his needles in the attack position, and then hunkered down until dark. I must have scared the little bugger. The buck grunt was a bit aggressive, I admit, and he probably wasn’t expecting it to come from twenty feet above him.

I plan on hunting one more time tonight before Steph and Sam get home from their trip, but I fear it will be slow going again. The moon is incredibly bright right now and with clear skies in the forecast I doubt the deer will be moving early. But as they say, “You can’t get them if you don’t go.” I guess I can always watch porcupines. They seem to be unaffected by the moonlight and strangely attracted to me this year.

The Vermont early archery season came to a close yesterday, but New Hampshire’s is still going strong. This next week will be some of the best time to be in the woods. The bucks are starting to cruise looking for does and I’ve found them to be responsive to calling this time of year. I especially recommend a doe bleat of some sort. My favorite is the Primos Can Call. If a cruising buck hears that he’s apt to change direction and head your way.